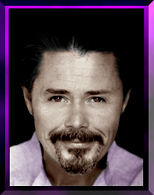 I'm Emlyn Harris, the creator and writer of the Sexton's Tales. If you do get a chance to listen to the series, or any of the dramas and documentaries I've created, I really hope you enjoy them.

I originally started writing for a living when I was as an out-of-work actor; I trained at the Bristol Old Vic alongside Dan Day-Lewis and Miranda Richardson - he was better at it than me, and she was better and much prettier.
The Sexton's Tales came about when one Sunday in 1989, a girlfriend suggested that we go for a stroll around Highgate Cemetery, which was near to where I lived, and that was the start of a strange love affair with the unusual which continues to this day.

Now don't get me wrong, I'm not unduly morbid, and these days quake behind the sofa with fear at the Hammer Horror re-runs I used to sneak into the local flea-pit to see with impunity as a lad. I didn't know it at the time, but a number of the Dracula films - starring Christopher Lee as the Prince of Darkness - were actually shot in the crumbling catacombs of the then neglected cemetery.

The Cemetery of the Parish of St. James Highgate, is quite simply unlike any other place I've know or visited. There is magic at work in those thirty seven acres; a sublime enchantment of history, art and literature, which echoes from the depths of the gothic mausoleums and lures in unsuspecting passers-by. The late Poet Laureate Sir John Betjemann, who frequently visited his father's grave at Highgate, summed up the mysterious milieu of the cemetery with the phrase 'The Victorian Valhalla', and I think he was dead right...

An array of virtual laurel leaves

Email me for further info & enquiries.